Lessons From An Elf

We succumbed to the whole “Elf on the Shelf” exercise a few years ago when Ellie the Elf joined our family. Both of my kids love her—despite the fact that she hasn’t traditionally been all that creative in her hiding spots and frequently neglected to move at all.

But this year was different. Ellie not only moved every night, she made subtle movements during the day (while the kids were at school). The Elf showed a little imagination—some zip-lining to the Christmas tree, snacking on a muffin, and even crafting a new hat from the same felt we’d used making ornaments that day. While this was no elaborate effort curated from Pinterest, it is a great example of the little changes I’m making. The trick, I’ve learned, is to actually look for, acknowledge and use these changes to fuel what comes next.

My YogaPod instructor actually alluded to this today when she urged us all to celebrate what we’re doing right instead of contemplating where we’ve messed up or how much we’ve left to do. And while the actions of an Elf may not seem significant—they are. The holidays are ripe with to-do lists and over-spending and dedicating a lot of brain time to activities that only occur this time of year. It takes patience and a sense of calm to devote even a few minutes to an Elf for 24 consecutive nights to enchant a couple kids whose belief in such magic will fade in the all-to-near future.

The truth is, I think I’d lost my sense of fun. I’m happy to see it returning—even if it is wrapped up in the sometimes silly, always exciting activities of an Elf. Ellie’s shenanigans are a sign that my efforts of the past several months are adding up—that my ability to not only handle stress, but have fun in the midst of it getting better. And that’s worth celebrating. 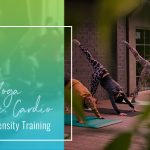